Babes of the Pave. Prostitute Babies in Cardiff.

Babes of the Pave: Prostitute Babies in Cardiff

Warning- Themes of sex and child deaths in this article.

This blog is a continuation of a series as I continue to construct a book called 'Notorious: Charlotte Street and the Lane'. See previous blogposts and for art go to www.anthonyrhys.com

Half of the people in my book are prostitutes. They sometimes end up running brothels themselves or moving away from the occupation but they start off as prostitutes. Considering how one role of the prostitute was to have a lot of sexual intercourse you'd expect to find their babies everywhere in Cardiff. The opposite is true and their children are usually non-existent in the records.

This post is about how very difficult it can be to find their babies. 'Normal' family history is a pretty straightforward task- looking for formal birth, death and marriage records, it's usually C follows B follows A. When looking for prostitute children it's very often G follows X follows 7. It's illusive and sometimes illogical and, as I'm finding out as I research Notorious, it's also incredibly hard.


It is very important for me and my book to find these babies. You cannot tell a life story if you miss out the crucial, primal, often harrowing experiences of childbirth and rearing that these women faced. I also get frustrated reading material about Victorian prostitution that concentrates on the laws and middle class attitudes towards them- I want to find them themselves.

Here I give four case studies of my searches for the 'Babes of the Paves' for four Cardiff girls.

Ann Anthony was a Cardiff prostitute. She became active in the profession in 1844 and seems to have left it after a long prison sentence from 1855 to 1861. She never officially married and I think she died in Cardiff in 1880 aged 50.

Baby Ruth is an example of using a 'holistic' attitude to the sources. There are no references to Ann being pregnant or with a child in any of the newspaper or census reports. In fact she wasn't in the 1851 or 1861 censuses so to find her alone took some work. eventually I tracked her down.


In 1851 she is living with her bully John Fletcher as Ann Fletcher. In the 1861 census she is simply an A A in the Brixton Prison listings. 1871 she still eludes me.

So, taking the jump to Ann Fletcher I found this: Ruth, daughter of Anne Fletcher from 1847. 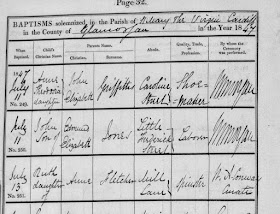 All well and good. the Mill Lane address is acceptable as it is just behind Charlotte Street where she worked. The prostitutes lodged everywhere and seldom stayed at any one house, beerhouse or brothel for long.

Then there is this: The death of Ruth Fletcher aged 3 weeks in China Row.

Again, all well and good- China Row is also very close to Charlotte Street and was part of the supporting slum area around it. The problem is the hundreds of single woman and single parent births around this time, it's not unusual at all.

I wanted to confirm this baby Fletcher was linked to Ann Anthony so I got the death certificate.

Yes, there we are- confirmation, Ruth Fletcher, the daughter of John Fletcher, with Ann Anthony present at the death at Mill Lane. Poor Ruth died of convulsions at 3 weeks with no doctor or medical attention. At least Ann was there at the time.

That was easy wasn't it? This adds a lot to Ann's story. It also adds to her narrative things you would never have thought of if you were unaware of little Ruth. One example is when she jumped in front of a violent bully who was about to attack one of her friends. She did that when she was five months pregnant.

Example number two is mainly the benefit of randomness and taking a chance. It starts with this, the burial of little Catherine Rees:

There is no corresponding baptism record to find the name of the parents of this Catherine. Now a child death on Whitmore Lane was not uncommon, in these church records there are hundreds. What I was actually doing here for the book was focusing on one cluster of child deaths to show the high rates of mortality among children on Whitmore Lane, Catherine Rees was just one of four young infants who died there from 7th July- August 3rd 1841.

But when the death certificate came it was pointing towards this being a prostitute's child.

Lo and behold there is an Elizabeth Rees working in Thomas Thomas' brothel, in the 1841 census She's one of 7 women working there (The census taker has used the euphemism of 'single woman'). Tommy Thomas ran a notorious beer house and brothel rolled into one. It features heavily in newspaper reports at the time. 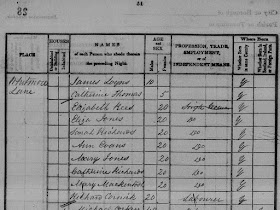 The 1841 census was taken on June 6th, the baby was born mid-June. Elizabeth was probably working in the brothel right up until she gave birth. Catherine Rees lived for five weeks before dying of convulsions, a generic term for any child death linked with high fevers or epilepsy.


I think that Elizabeth Rees was arrested for theft in April 1847 and died in Cardiff Gaol on the 26th June while awaiting trial. She was a heavy drinker and 'Died by the visitation of God of chronic disease of the stomach.'

So this was a chance find.

Whizz forward a little to 1852 and the prostitute Sarah Clark. Sarah turns up in early 1849 as a prostitute working in China, the notorious area in Merthyr Tydfil. She moved down to Whitmore Lane in late 1849 and appears on the 1851 census running her own brothel, aged 22, at 4 Whitmore Lane with three other prostitutes. I knew that Sarah Clark had a baby because of these two sorrowful newspaper reports: 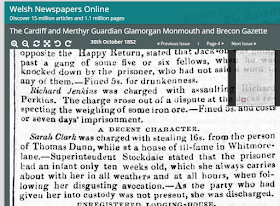 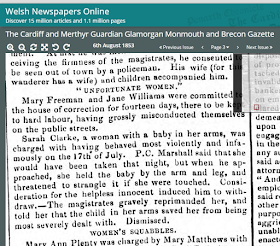 I don't think Sarah Clark would win a mother of the year award after these two incidents but it shows she had a baby. The problem was- who was he/she? There was no indication on census returns of a daughter.

It didn't take long to find little Amelia's birth in the GRO indexes and here she is:

Amelia completely disappears after August 6th 1853 when she was dangled by her mother. She doesn't die, get buried, married or appear in any census anywhere, so that is a continuing task. I think she is either dead and unofficially buried or she has been taken away from Sarah, adopted or institutionalised and had her name changed.


Sarah Clark did go on to have more children, but that is another story. She also continued to run brothels until at least 1903, that's fifty years in the business!!! But again, that's another story.

I've kept the worst until last. Ann Owens, nicknamed 'Little Punch', was a prostitute from the age of 12. First in Swansea at the start of 1850 then in Cardiff from 1851 where she is working at Mrs Prothero's brothel on Whitmore Lane. Ann is 19 years old and heavily pregnant when she gets a seven year transportation sentence for her part in the robbery of a canal woman's house. The court reports her state during the proceedings as 'far advanced in pregnancy': 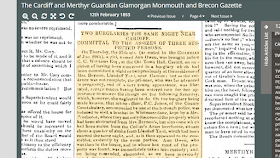 .
When Little Punch got her seven year sentence she broke down in court in a 'paroxysm of grief', no wonder as she was also four months pregnant.

From this it was a bit of detective work to track down her child with an 'Owen' or 'Owens' surname in Wales. I thought she gave birth before travelling to Lewes prison then Millbank but there was nothing that matched in Cardiff, there was nothing at Millbank or Lewes either. Finally I found this description of Ann Owens' tattoos from five years later- they were recorded when she was imprisoned for a ten year transportation sentence for theft in Merthyr Tydfil. 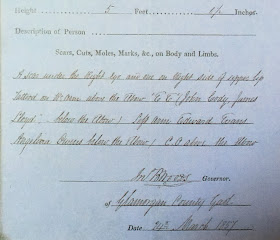 Ignore the other tattoos for now apart from 'Angelina Owens' below the left elbow. I know she had no relatives with that name so Bingo! A further search of the London records and Angelina Owens was found, well her burial was- in Victoria Park Cemetery on June 16th 1854.

Angelina was born at Millbank prison as her birth is registered in Westminster London 1853.

Her death certificate states she died of secondary syphilis and diarrhoea. It's hardly surprising that Ann Owens had syphilis as at age 19 she had already been a prostitute for seven years. Ann may have been present at the death, she may not have been, it lists Mary Smith, the Head Nurse at Brixton as being the informant. I doubt she would have been allowed to attend the funeral. Her tattoo was the only way she had to memorialise her one year old daughter, her angel.

So there we are. In retrospect it makes sense finding each of these but when you have very little to go on it is a hard, time consuming part of the research, but it tells the lives of these young girls and tells it well.